Skip to content
Workplace Conflict Can Be Constructive–If You Know How To Channel It Correctly Posted on Dec 17, 2013 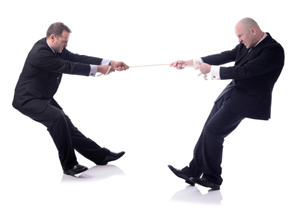 ve you ever had a great idea for change in your workplace–a way to do things cheaper…faster…more efficiently…or more profitably–but chosen to keep your mouth shut because voicing your idea might anger your colleagues?

Have you ever been given instructions that you knew to be wrong, but kept your thoughts to yourself because you didn’t know whether your boss would appreciate being corrected?

Or how about this: Have you, as a manager, encountered a painful, destructive conflict within your team and known that you could have prevented the negative outcomes if you had addressed it sooner?

Then you know that managers who do not make space in the workplace for constructive conflict are doing both their employees and their employers a disservice. If you have not created a work environment where employees feel that they can speak their minds (and survive the conflict that may ensue), then they may be keeping their best ideas to themselves. Or underperforming. Or leaving.

And that’s not good for anybody.

Conflict, well-managed, can be good for your team and your company. The question is: How do you encourage and manage it constructively?

Bring Conflict to the Surface

Workplace conflict is terrifying to most people, especially if they do not have assurance that they will be taken seriously and given some measure of protection from co-workers if they speak up. It’s far easier to just keep quiet.

So if you want to create a work environment where people do not fear disagreements, then you need to send a message that dissenting opinions are welcome. Do you have an office contrarian? Next time she expresses a negative opinion of something, don’t just nudge it aside or gloss over it–rather, invite her to explore it further. You’ll be modeling receptiveness…and you might learn something helpful in the process.

You might signal your openness to dissent by creating something as simple as an anonymous suggestion box. Each month, read the suggestions aloud at a staff meeting. Solicit comments from your team before you respond yourself. Encourage open discussion. Don’t shut down debate; rather, try to steer it gently away from generalized complaints or personal criticism and toward practical solutions.

Check Your Own Response

If you are like most people, your first response to criticism is defensiveness. It would be great if people offered their suggestions in a tactful, constructive way–but even when they don’t, it is your job as a manager to respond constructively to the content of their critique.

So take a deep breath and show your receptive face. Ask questions. Chances are, there is a kernel of truth in even the most annoying or poorly framed suggestion. If you can tease out that kernel and respond to it constructively, you will powerfully demonstrate to everyone on your team that conflict is not the end of the world; indeed, it can be a force for positive change.

Don’t ignore symptoms of budding interpersonal conflict. The best time to address it is before it grows. Bring the parties to a neutral space and encourage them to air their differences–focusing on behavior, not personality–while you listen. Employ active listening skills but refrain from refereeing. Your attitude will show them that conflict in itself is not a bad thing.

If the conflict involves competing ideas about how best to accomplish a goal, encourage people to test those ideas. Try it both ways and set up a competition. If you manage this exercise carefully, the outcome could be positive for everyone involved–and for the bottom line.

Conflict between individuals or between an individual and an organization can be resolved in one of several ways. One side can win and the other concede. Both sides can give a little to achieve compromise. And sometimes, there’s just no resolution.

Each of these is a legitimate outcome. Allowing conflict to surface in the workplace means that sometimes people will lose. You may even lose an employee. But if the one who concedes chooses to stay on, show him your support. It takes courage to confront conflict head on and accept the outcome; if the loser is not made to suffer unnecessarily, others will be bolstered in their own courage.

Compromise is a wonderful outcome. Everybody wins, and the company moves forward.

But when compromise cannot be reached, don’t jump to the conclusion that someone must back down. People may be surprised to find that differing opinions can peacefully co-exist in the workplace. If they have at least had the opportunity to air their ideas, they will not feel stifled and angry, and everyone can move on.

And you just may have achieved the best outcome of all: The next time someone has a good idea that might rock the boat, they won’t be afraid to speak up.